Fusion Magazine presents its annual edition highlighting the border art scene. This issue features a handful of artists that are contributing to our local community.

Villa-Hernández is a 1st generation Mexican-American filmmaker based out of El Paso, TX. He is the 2019 NALAC - Adán Medrano Legacy Award winner in Film.  His films have found support with MCAD (local arts org), the Austin Film Society, American Documentary-POV, and the Tribeca Film Institute.  In 2017, he ran his first successful crowd funding campaign on Seed & Spark. His films explore topics such as culture and tech. 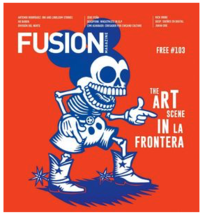 Only in El Paso - Alamo Drafthouse